How does drumming affect the mind?

I have quite a busy mind so I was curious to see where the drumming brought me. I had heard stories of how it takes you to another space, how it makes you feel relaxed and how it helps you to bond within your group (your drumming circle). I was open & ready to see what this experience would reveal and how it would affect my over stretched, exhausted brain. Having little or no sense of rhythm I had never entertained the thought of taking a drumming class. So before I booked in for my first class I did a bit of research on the effects. Being a practical girl, I needed a little more convincing, I wanted some hard scientific evidence that this was worth my time and effort, not to mention exposing myself as the uncoordinated, rhythm-less human that I know myself to be.

"A Neuroscientist David Eagleman, a renaissance researcher The New Yorker calls “a man obsessed with time,” conducted an experiment with various professional drummers at Brian Eno’s studio. It was Eno who theorized that drummers have a unique mental makeup, and it turns out “Eno was right: drummers do have different brains from the rest.” Eagleman’s test showed “a huge statistical difference between the drummers’ timing and that of test subjects.” Says Eagleman, “Now we know that there is something anatomically different about them.” Their ability to keep time gives them an intuitive understanding of the rhythmic patterns they perceive all around them." Read more here

A further study from the Karolinska Institutet in Stockholm found a link between intelligence, good timing and the part of the brain used for problem-solving. Instudies on the effects of rhythm on brains, researchers showed that experiencing a steady rhythm actually improves cognitive function. One psychology professor at the University of Washington used rhythmic light and sound therapy on his students and discovered that their grades improved. Similarly, one researcher at the University of Texas Medical Branch used that method on a group of elementary and middle school boys with ADD. The therapies had a similar effect to Ritalin, eventually making lasting increases to the boys' IQ scores. Read more here

Why then, knowing all this why would I have any resistance to trying a class? I arrived, never having used an African drum in my life, so already anxious and nervous about how I would throw everyone off beat. I was invited to sit in a circle and a beautiful hand carved djembe drum was placed in front of me. As we were instructed on how to sit comfortably, hold the drum and to make the different sounds by the position of our hands, I frantically assured my poor neighbour who had the misfortune to sit next to me that I would beat the drum quietly so as not to upset his beat and apologised for my drumming in advance.

Well, under the gentle guidance of Tim, the experienced and newbies settled easily into a gentle step by step rhythm. It didn’t matter if we messed up, we were reassured often throughout the session. And when I messed up, which was a few times, I found myself giggling but no one else even noticed. When we got into a rhythm and I was actually playing it, I felt an absolute rush of delight. As we kept playing it over and over, my delight changed to fascination as thoughts and feelings raced through my head. Even though I was in a room with lots of other strangers, we were playing as a unit. I was aware in my peripheral vision of their hands on their drums beating the same beat in time with mine. We were invited to close our eyes and it brought the drumming to another level, it took me to another space - a space within. The drumming was brought to a crescendo………after many attempts at following instruction to an end……..eventually we all managed to end on the same beat and everyone broke into spontaneous applause. I left that session feeling invigorated, stress-less and happy. I felt I had met a group of people with whom I had shared something special and unique. There was non-verbal communication, an atmosphere and state of mind induced that allowed a drumming beat and flow to emerge. I cannot agree more with the statement below:

"But drumming ultimately has therapeutic value, providing the emotional and physical benefits collectively known as “drummer’s high,” an endorphin rush that can only be stimulated by playing music, not simply listening to it. In addition to increasing people’s pain thresholds, Oxford psychologists found, the endorphin-filled act of drumming increases positive emotions and leads people to work together in a more cooperative fashion."Read more here

To see an interesting short video on the scientific explanation for what happens to the brain when drumming, click on the image below. What does a drummers brain look like? Pretty much anyone can be taught to play a simple rhythm on a hand drum such as a djembe, and to play it as part of a group. If the science proves it, the benefits are endless, why not integrate it into your weekly routine? So my advice, is give it a try. I am certainly hooked and don’t think I will ever look back.

Want to book in for a drumming session? Make your enquiry here

Would you like to learn how to facilitate a drumming group? You can avail of InRhythm's Super Early Bird offer here. Courses available Australia wide.

If you are interested in a FREE drumming workshop, please register your interest here!

Sources: The Neuroscience of Drumming & Science shows how drummers brains are different

Improving Your Mental Health with Group Drumming
What is drum therapy? Where can I get meaningful t... 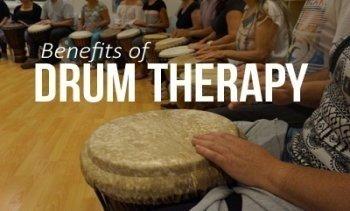